Lurgan Ulster Cup team also progress to the next round following an overall 4-3 win against Cloverhill. 3 home wins and an all important away win.

Next up for Lurgan is Armagh Friday 21st August, 4 matches will be played in Armagh and 3 matches at Lurgan.

Following last years B&D success Lurgan fielded a strong Senior Cup team against Dungannon GC in what was a modified format of the Senior Cup inter club competition. Under the 2020 format the team first out of the draw have the benefit of 3 matches played at home while the opposition play 2 at the their respective home venue. In this case Lurgan team captain Tom Douglas fielded a strong team, travelling to Dungannon with Peter Cummings, Michael McSherry & Ronan McCrory while at home had in form Nathan McCann and David Sutton. Lurgan came out overall winners 3 matches to 2 matches courtesy of two away wins for Peter (3/2) & Michael (3/1) and a home win for Nathan (6/4), the remaining two matches were called in after 15 holes. Well done all.

Next up for Lurgan will be winners of Cloverhill and Slieve Russell which is to be played before 3rd August.

This weekend see’s the Lurgan Jimmy Bruen team in action home and away to Loughall in a modified match-play format.

Tee time will be 2pm at both venues.

For those wishing to support the teams at Lurgan, in compliance with GUI guidelines please ensure you drop into the Pro-shop on arrival and leave your name and contact details for trace & track purposes.

Junior Cowdy Lose Out to Portadown

Following a 3-1 home advantage back in April, Darryl McErlean’s Junior Cowdy team were unable to secure the 1 ½ matches at Portadown in the return leg. Portadwon won 3 ½ to ½ match to progress to the next round. (Team Photo below) 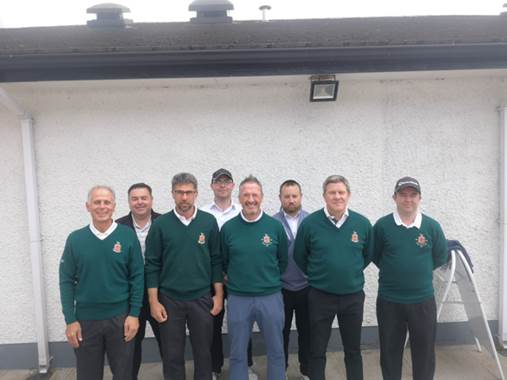 Well done to the James Horan's Lurgan Junior Cup team following an impressive 4 ½ - ½ result against Edenmore on Sunday 9th August. The team progress to the next round against Tandragee, match details to be confirmed.

James Horan’s Junior Cup team will be in action and Lurgan & Edenmore on Sunday 9th August. 3 matches will be played in Lurgan and 2 matches in Edenmore. Team &tee time TBC.